June 1st-3rd 2014.   All rivers were clear and fishable except the Soca which was a little off color and not completely in prime season.

Lodging: Apartments Bobi.
Ciginj is a pretty central place to stay.  You can’t beat the prices ( booked though Booking.com) and the room was wonderful.  The back patio is amazing and so are the views.

What to drink: Pivo (beer) Lasko 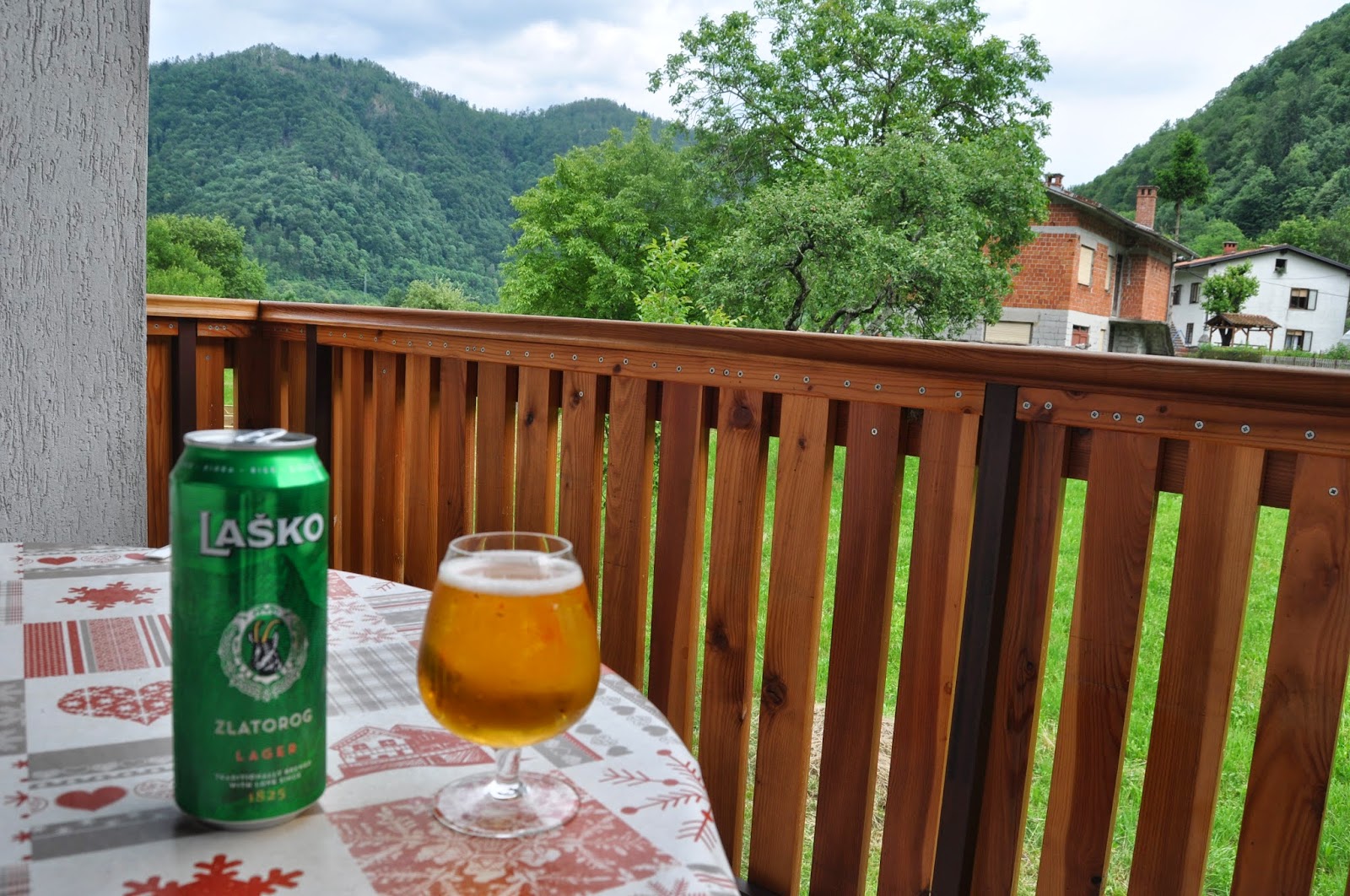 I was recently lucky enough to be an invited speaker at a scientific conference in Trieste Italy.  I really had no idea where Trieste was when I first heard of it.  It turns out it is about as far east in Italy as one can go.  The region Borders Slovenia on the eastern shore of the Adriatic sea and was once part of the Austrian Empire.  There is an amazing castle and city wall in the old part of the city.  Mainly, Trieste is famous for coffee.  Of course espresso and not a simple drip coffee.  Being American and thinking most of the time I could use a coffee while they were taking the time to make my coffee I was skeptical that it would be worth the wait.  It was worth the wait and I may have developed a life long obsession for a decent cappuccino that may have no cure but to go back to Trieste.  Trieste is home to Illy and many other world class coffee businesses; it was once the gateway for coffee in the Austro-hungarian empire.  Due to the intense timeline of the conference I really didn't get to enjoy Italy and the food as much as I would have liked but over all Trieste was a nice city to visit.  Light on tourists and a beautiful sea side setting.

After the meeting I went to Slovenia to fish for marble trout and the Adriatic grayling. Specifically to the Tolmin area managed by the Tolmin Angling Club.  Marble trout (Salmo marmoratus) are a close relative to brown trout and can interbreed to make a fertile hybrid.  Much like cutbows are fertile hybrids of rainbow trout and cutthroat trout.  Both sets of fish were separated long ago, the rainbows diverged from cutthroat by roaming down the Colorado river to the sea and Marble trout diverged due to geographical separation form brown trout in Europe.  Marble trout are mainly piscivorous when they mature and get big, really big.  The largest caught was 120 cm and 22.5 kg.  That is 47+ inches and 49 pounds.  I saw a few cruising below a dam that were as wide as some of the fish I catch around these parts.  They can eat as little as once a month so catching one that big can be tough to say the least.  I'm sure a 24 inch rainbow is a hefty meal.  With my guide Gasper I saw a pretty big marble cruising and chasing rainbows.  We saw a rainbow jump out of the water to get away, nearly a two feet high.  I was standing in about two feet of water and a rainbow came charging at us and what looked like a 30+ inch marble close behind.  The rainbow got away and my heart nearly leapt out of my chest.  I casted a big bunny streamer until my arm about fell off and it was getting cold and dark.  No huge marble for me that day.

Huge fish like that would have been nice but I was really there to see and catch the native species in a new and foreign place.  Earlier that day I had caught a few nice sized and very pretty marble trout and was thoroughly embarrassed by an Adriatic grayling.  We must have tried 7 flies on that fish and only got a handful of smug refusals.  The next day I tried the again and the grayling was back in the same spot- sliding back and forth in the current and rising every few minutes to something, maybe a small mayfly.  We tried caddis, mayflies emergers of multiple types, nymphs and even a huge brown drake the day before.  And we saw all of those flies on the water.  There were a handful of enormous brown drakes, caddis bobbing up and down and across the surface as well as huge yellow stone flies that looked and sounded like B52s marauding above the stream.  There were also a few very small mayflies of some kind that looked brown maybe a size 22.  I tried everything I had that seemed close to those small mayflies.  #20 BWO, nope.  Not even a refusal just ignored.  #18 and #20 para and reg. Adams.  Refusals-  getting somewhere.  Still, way too big is what I thought.  I tried my midge and trico dry assortment.  Nothing.  So I did want anyone would do at the end of their rope.  I tied on a #8 yellow Pat's rubber legs.  My guide had told me to use as long a leader as I could cast and no indicators.  It took me about a day to figure out how to fish nymphs like that but I'll likely do that from now on. The trees get a lot closer for some reason casting a 14 foot leader.  That was fun.   My cast to the grayling was a little long, he was about mid-pool and I hit it just at the top where a tree was hanging into the water.  What happened next was shocking.  The fly hit the water with a slap, rubber legs waving in the current, and went down about 3 inches when a huge marble trout came out from the undercut bank and nailed it.  He took me up and down the pool three times, I stomped trough the pool after him and finally got him in my woefully too small net.  It was then I realized that in my excitement to get to the grayling I forgot both of my cameras.  The big fish was surreally calm, like this was not his first rodeo in a net.  I held him under water by the tail along my net and he eclipsed its length, handle and all by a few inches.  Broad shouldered, huge headed but sleek like a stream trout should be, that fish was a marvel.  I held him facing the current until he nonchalantly cruised back to his place in the world where I'm sure he had no idea how far I had come, where I lived in the world and how much I appreciated the experience of catching him. 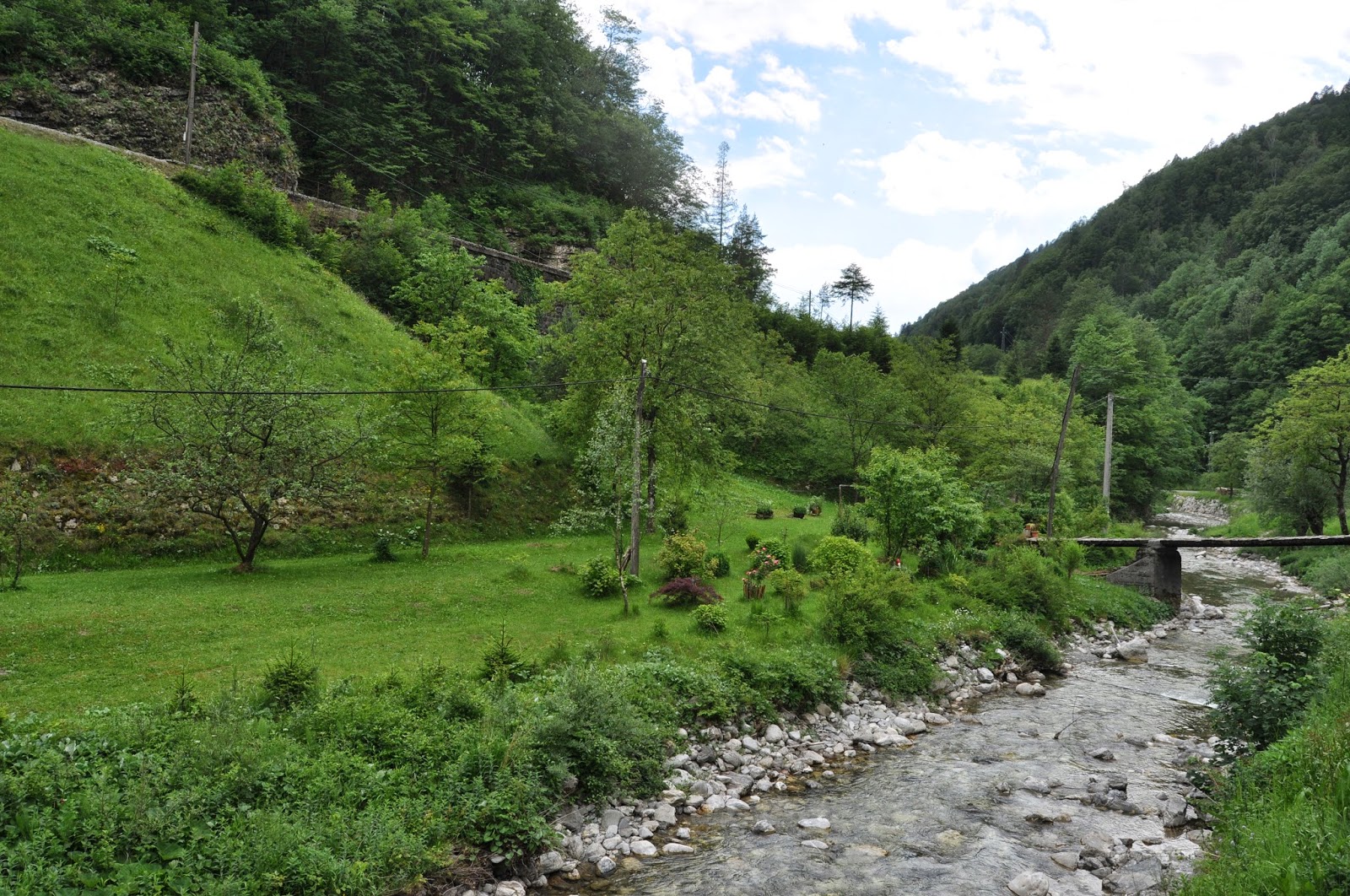 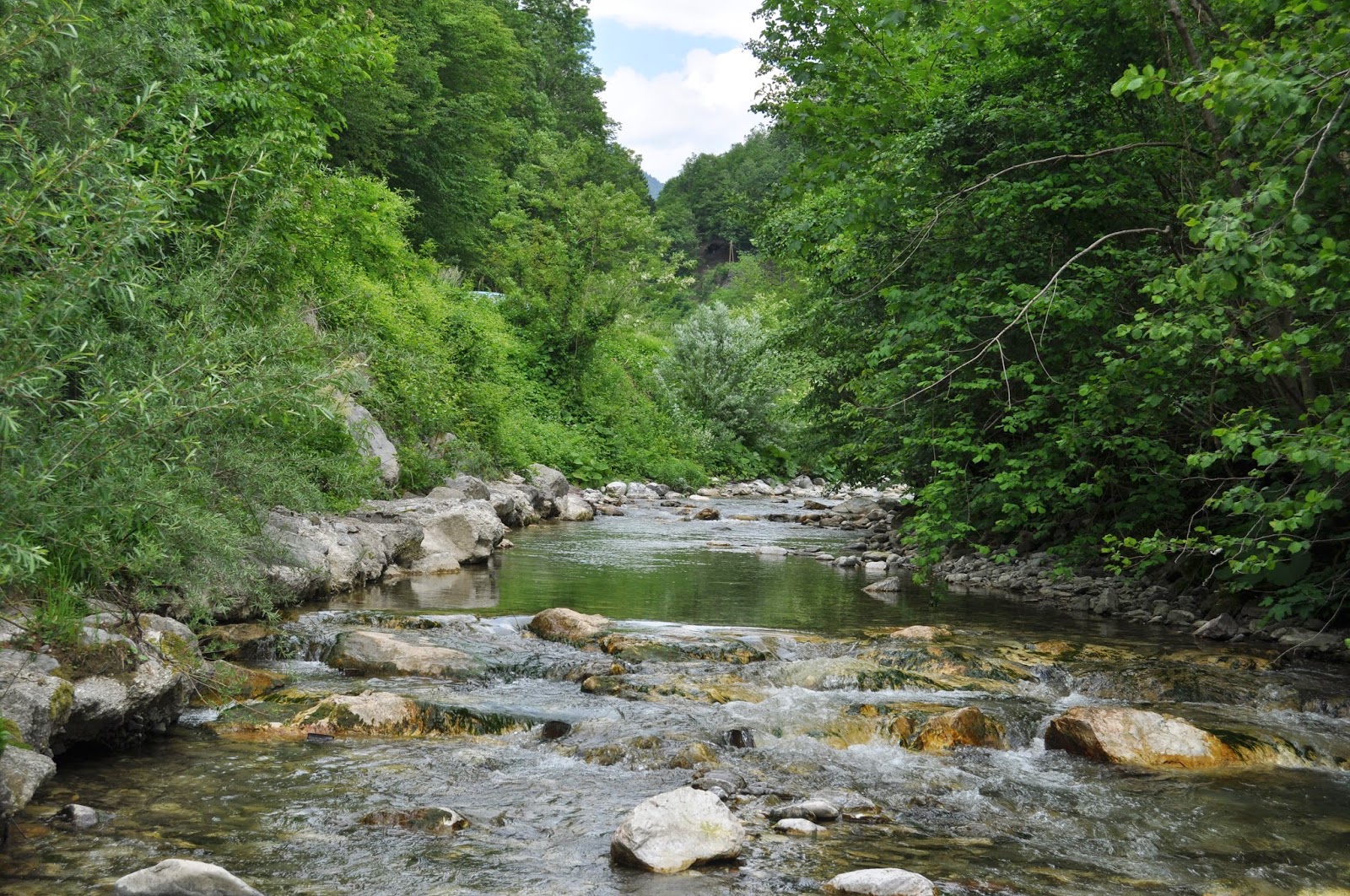 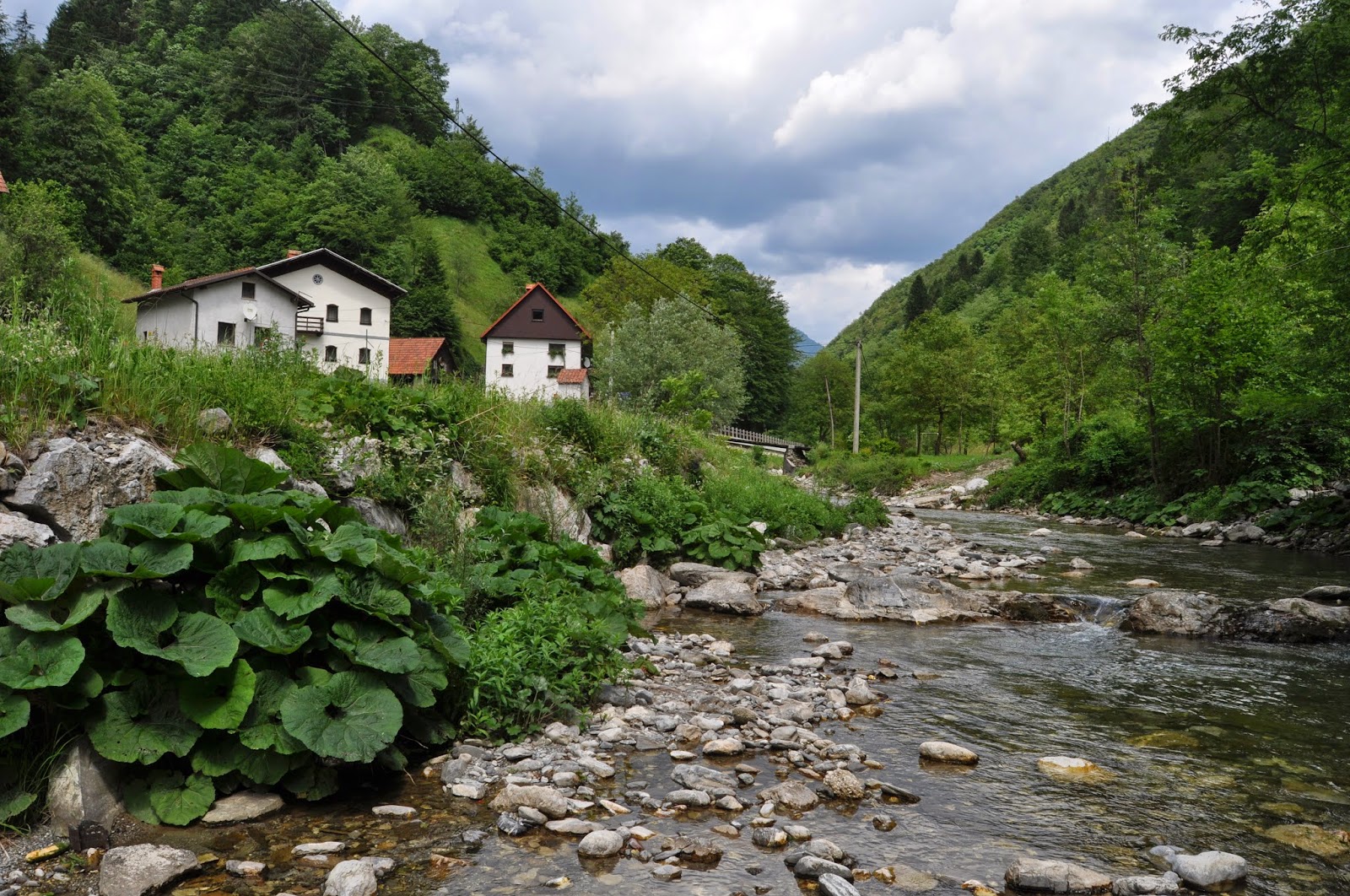 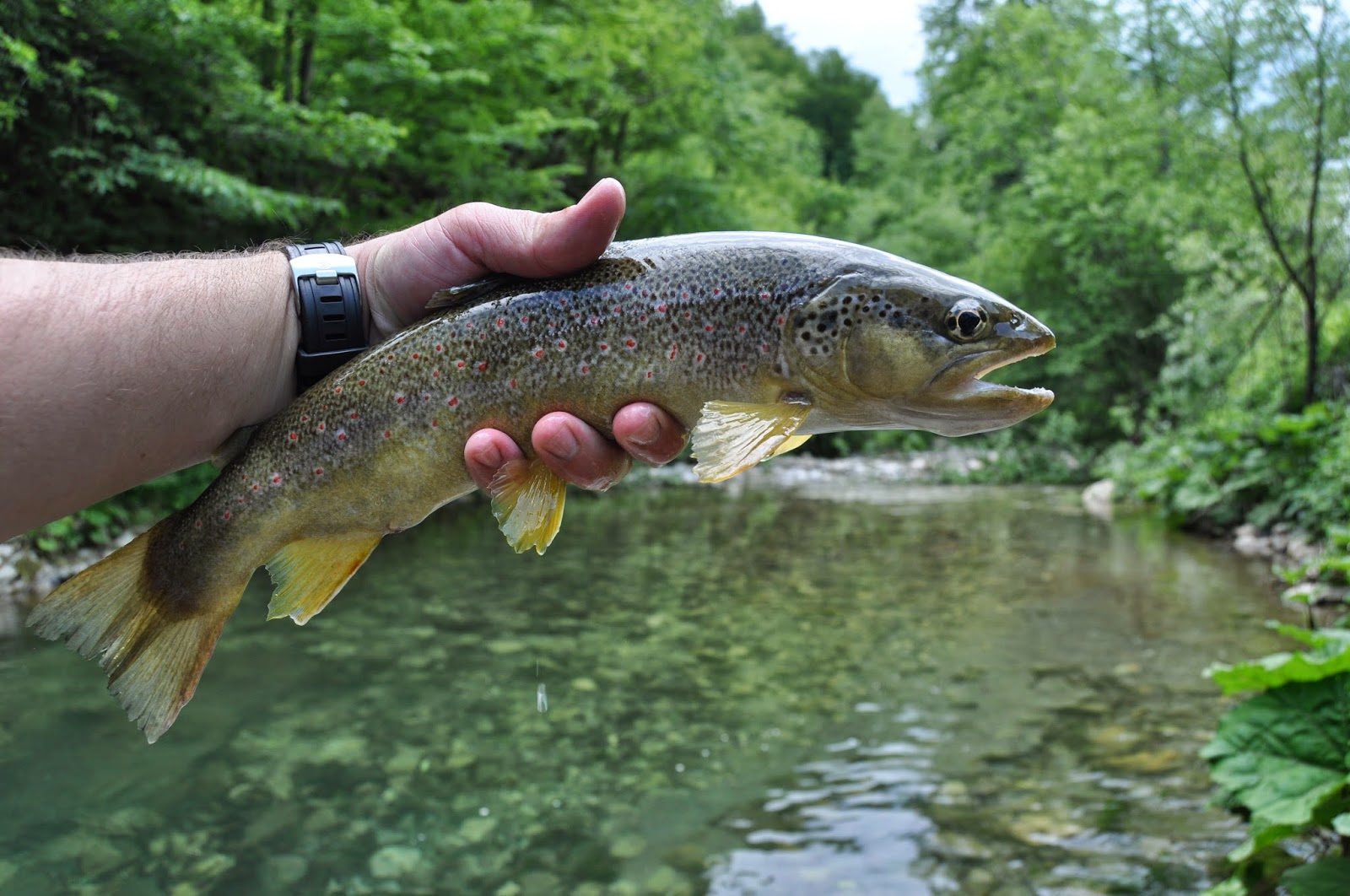 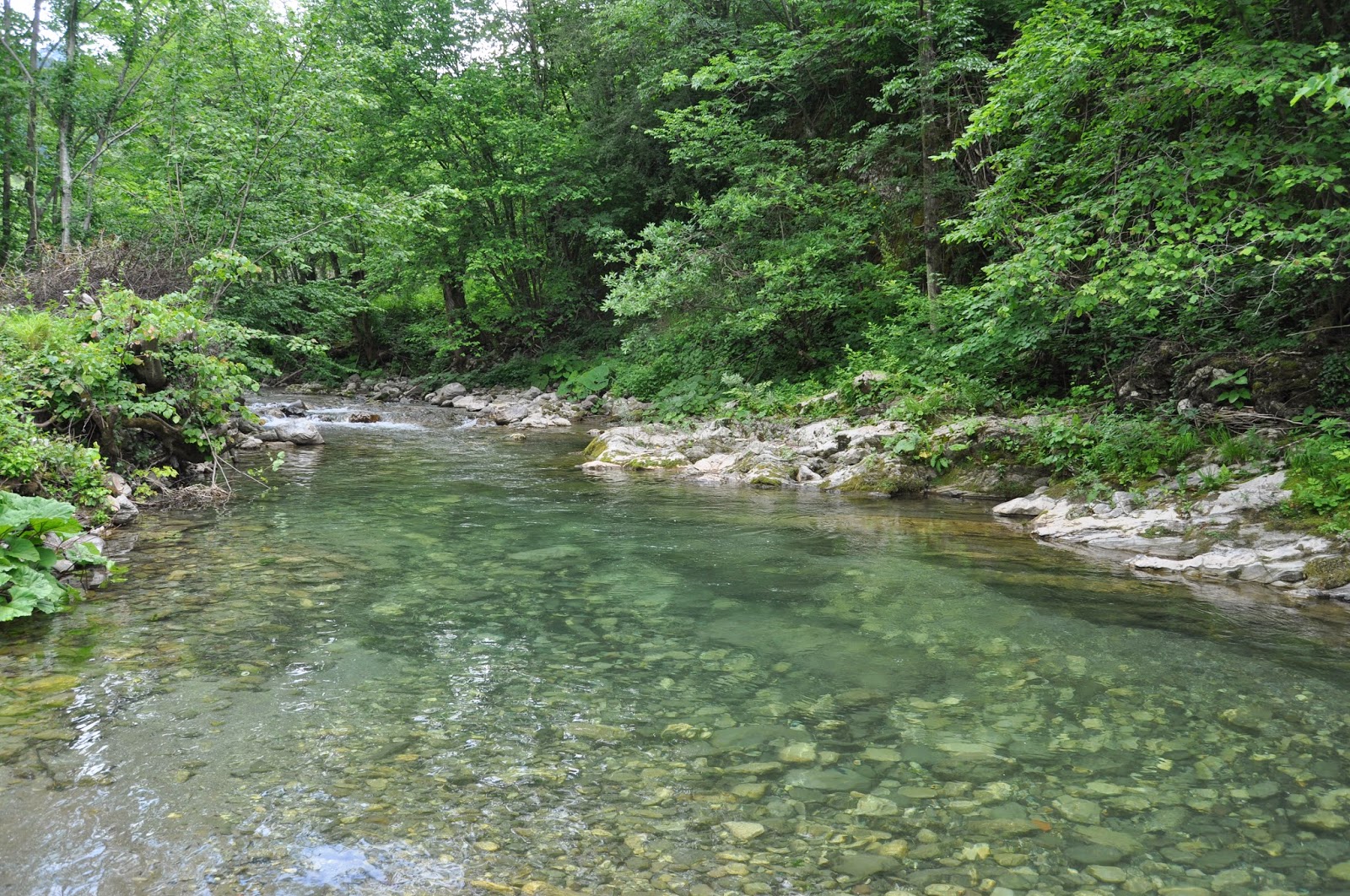 I fished many more pools and caught lots of really nice fish, some brown-marble hybrids a few more smaller marbles but no grayling.  On my way back to the car I wanted to check if the grayling was back in his spot.  He was. 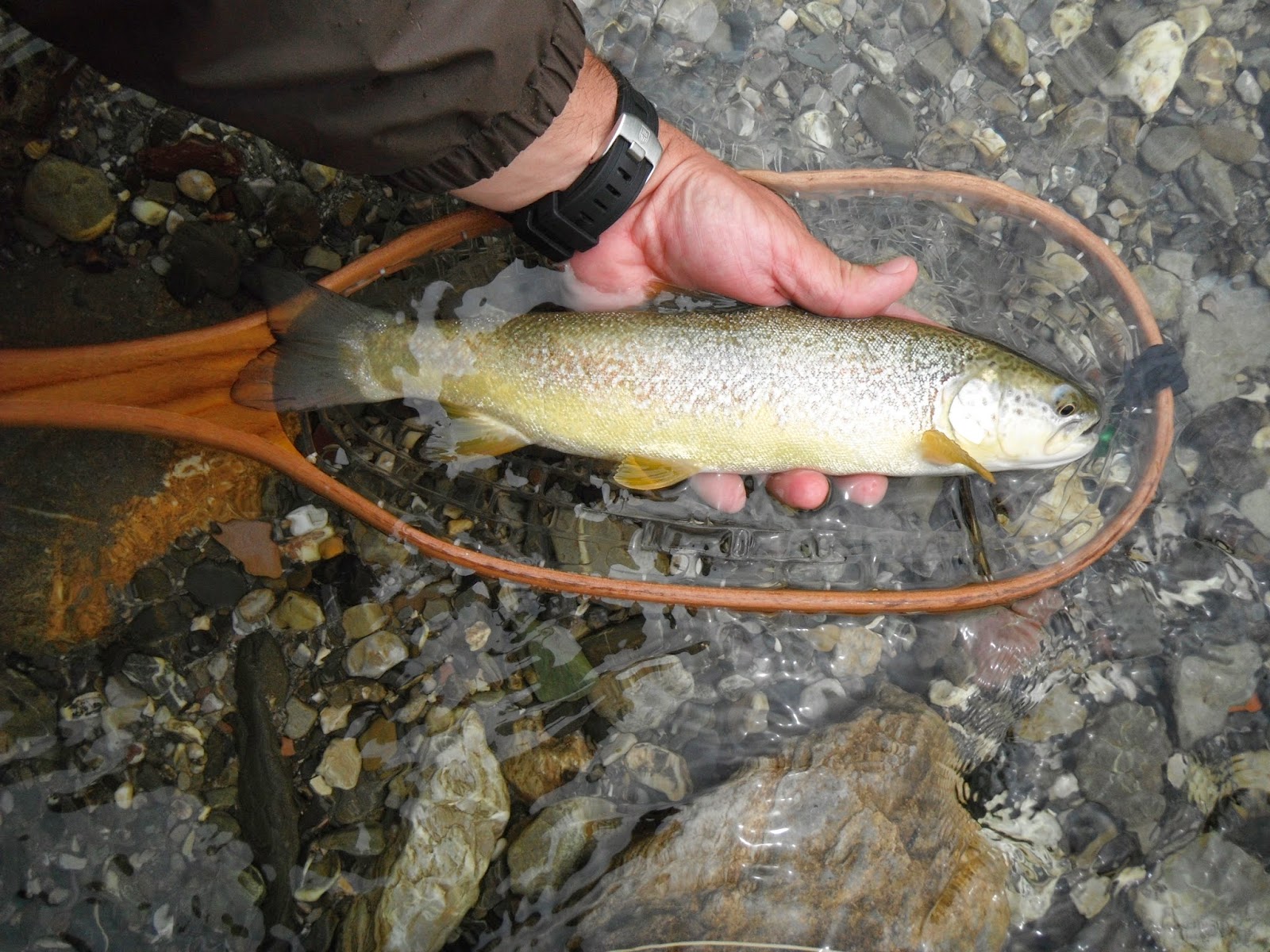 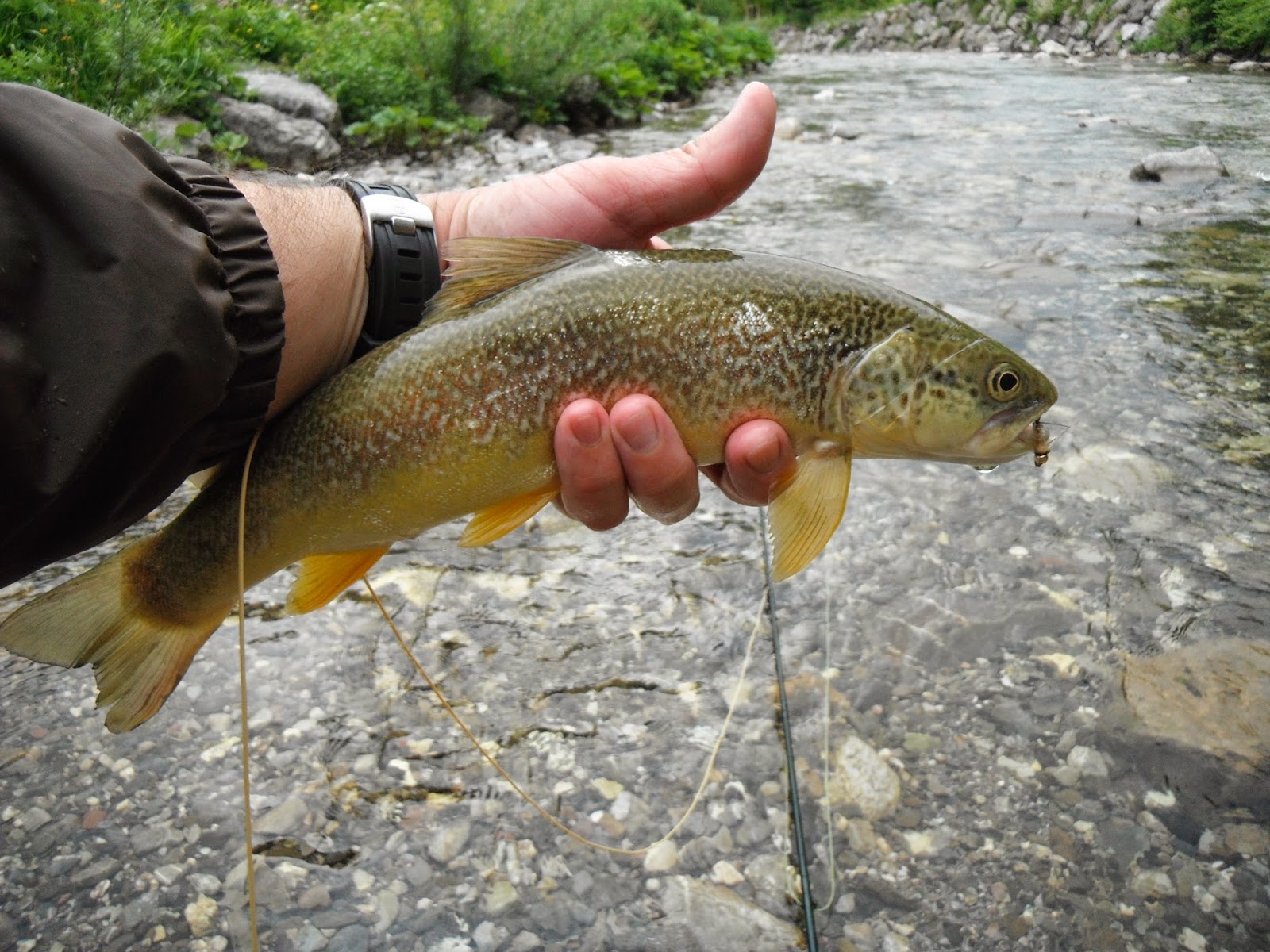 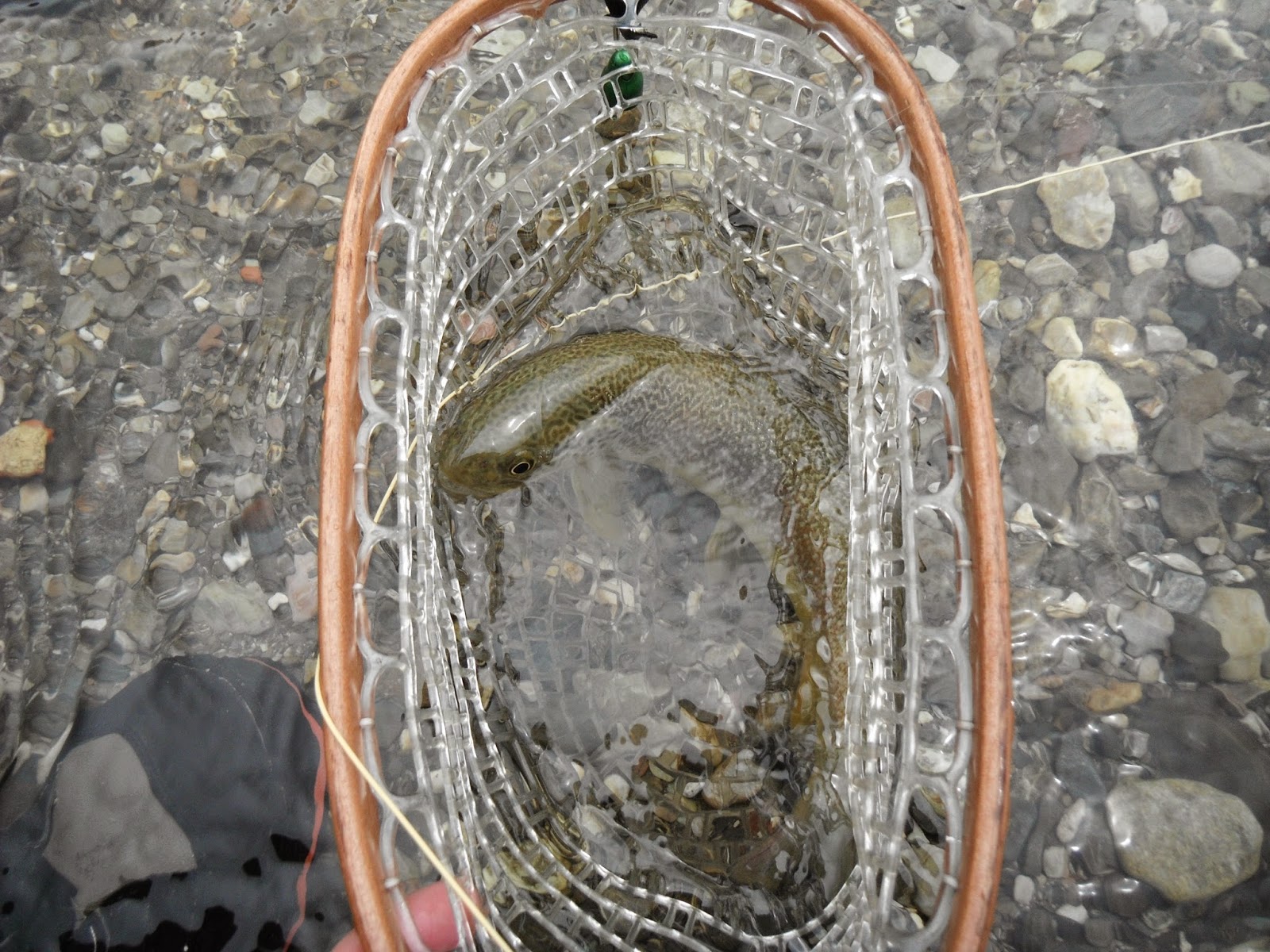 Two days in a row I caught a marble on a nymph in the pool so I knew I needed a dry fly he would take otherwise I would likely just spook him off catching another type of fish again.   A smaller caddis? No.  A moving caddis. No.  A stimulator? I was desperate.  No.   You can only fish one barbless fly at a time in Slovenia which became maddening.  I kept thinking if only I could fish a dropper.....  I tired small nymphs, a Pheasant tail, prince, copper john, a black and brown birds nest, a RS2 all sizes. nothing.  In my nymph box I have a few dry flies I use with dry-droppers.  One was a purple #16 para-adams left over from a trip to Montana.  They love that purple para-adams up there.  I was like what the hell if he takes this I clearly don't know anything about fish or was trying way too hard.  The first cast was short.  I picked it up and recast- long.  Wrapped around a branch I gently pulled back and it unwound itself instead and softly landed on the water.  The grayling charged over, stopped, looked for what seemed like a whole minute and turned away.  Epic refusal.  I cast a few more times and got a few more refusals.  It seemed like I was getting somewhere.  Finally on the 7 or 8th cast he charged over hesitated and them slammed the Adams.  Somehow, I was able to hesitate a half second and wait for his small downward facing mouth to grab the fly.  If you have caught grayling you know what I mean.  I yanked more flies away from rising grayling than I can count.  Its soooo hard to wait.  He was on.  This was no small grayling; easily the biggest I had seen and he took off.  I had him on for quite a while and was relishing in my accomplishment.  Then, at the top of the pool about 20 feet away the line went slack.  I slapped my rod down on the water swore like a sailor and was crushed.  I thought I would fish more that evening but I called it.  It was about 6 and I had lots of daylight left but I was a beaten man and need a few beers to help the wound licking.  That f%$king fish- I’m going to catch that f&%king fish.

The next day I was supposed to leave.  I had to drive back to Munich and I knew it would be a long and drive feeling mostly lost the whole time.  I still planned to fish until about 3 and get in late.  I felt a lot more comfortable on the water on the last day.  I knew the spots and felt like I had a handle on how to catch fish.  I fell into a rut but I knew where there were big fish and it was really hard not to go to those spots.  I started early on Soca (pronounced Socha) at the Milk hole.  There was a milk factory on the river and they let out wastewater with a little milk in to every once in a while.  The result was lots of bugs and a school of about 50 broad sided twenty inch plus rainbows.  I landed the biggest rainbow I had ever caught at this spot the day before.  It looked like a steelhead. Taking a picture of a fish like that by yourself is tough.  I got one of her in the net but it wasn’t very good.  I caught two in about an hour, one was a nice sized fish, and I headed back to the fly shop for more supplies.  After an amazing cappuccino I headed back to catch that grayling on the Baca.


The drive up the canyon where the Baca flows is amazing.  There are some pretty narrow spots on the road but I managed not to hit anyone.  I got out of the car and setup my 5wt and immediately tied on the same fly I got the grayling to hit the day before.  On the walk down I was trying to prepare myself for the fish not being there.  But when I got to the spot there he was, doing the same thing day in and day out.  On the second cast I hooked him again.  I was amazed.  This time I was not letting him go anywhere.  I pulled him into the net as fast as I could.  I was so happy once he was in the net, I had caught all of the native salmonids in the valley.  The day before I thought I would go home thinking about that grayling for the rest of my life.  Maybe it would have been better to leave something to come back for but either way, my trip to Slovenia and Soca valley was amazing and the trip of a lifetime. 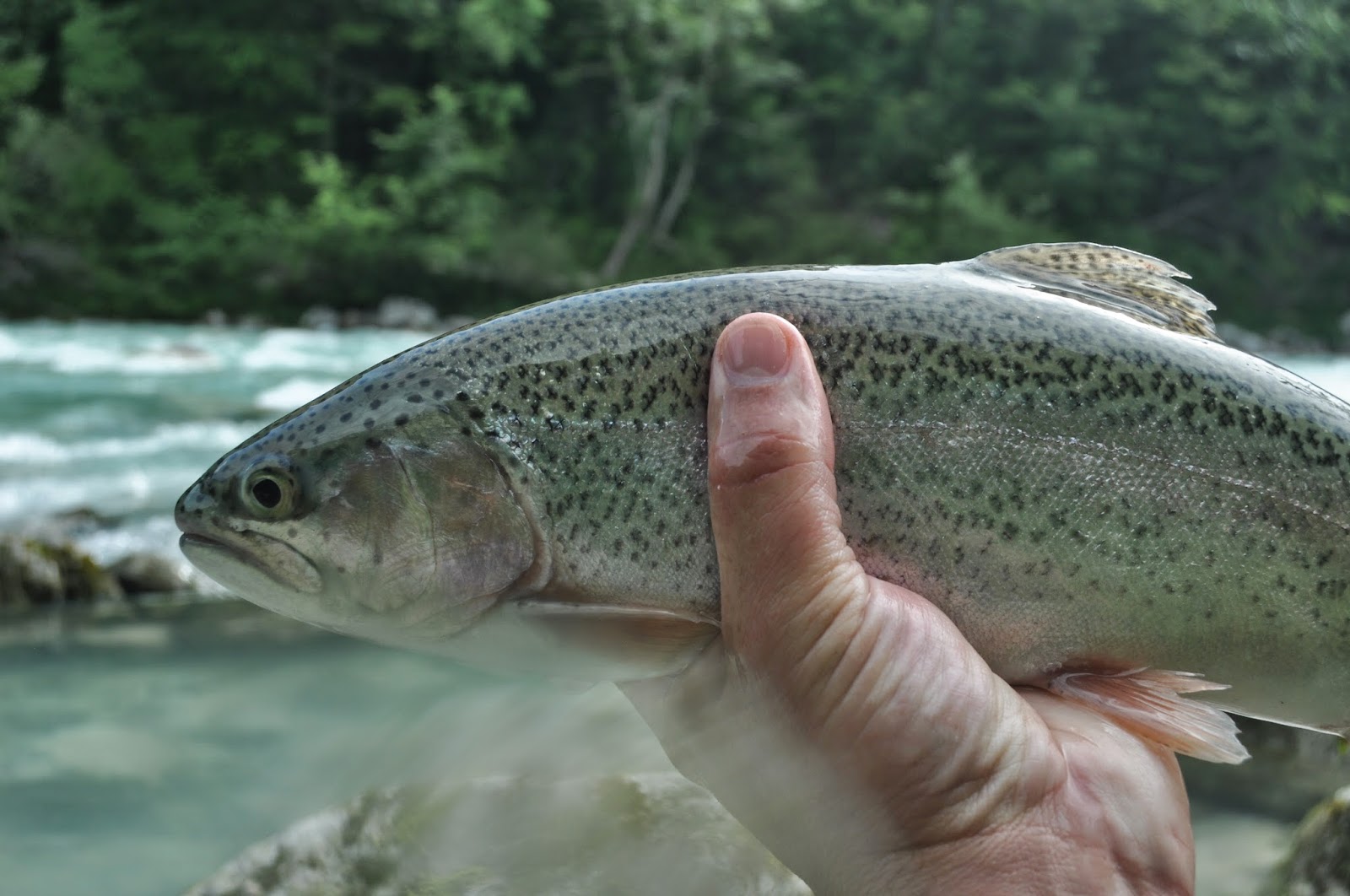 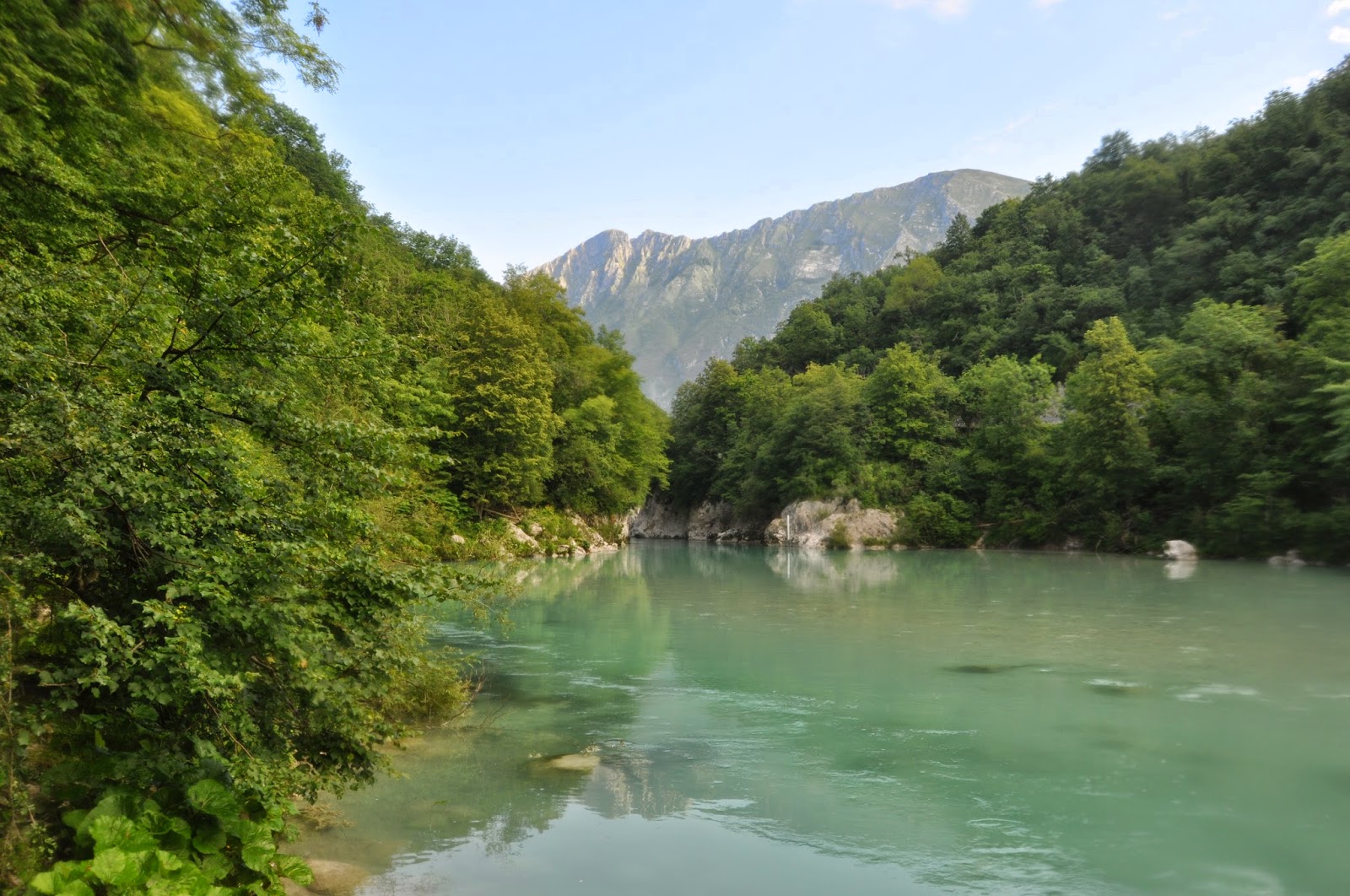 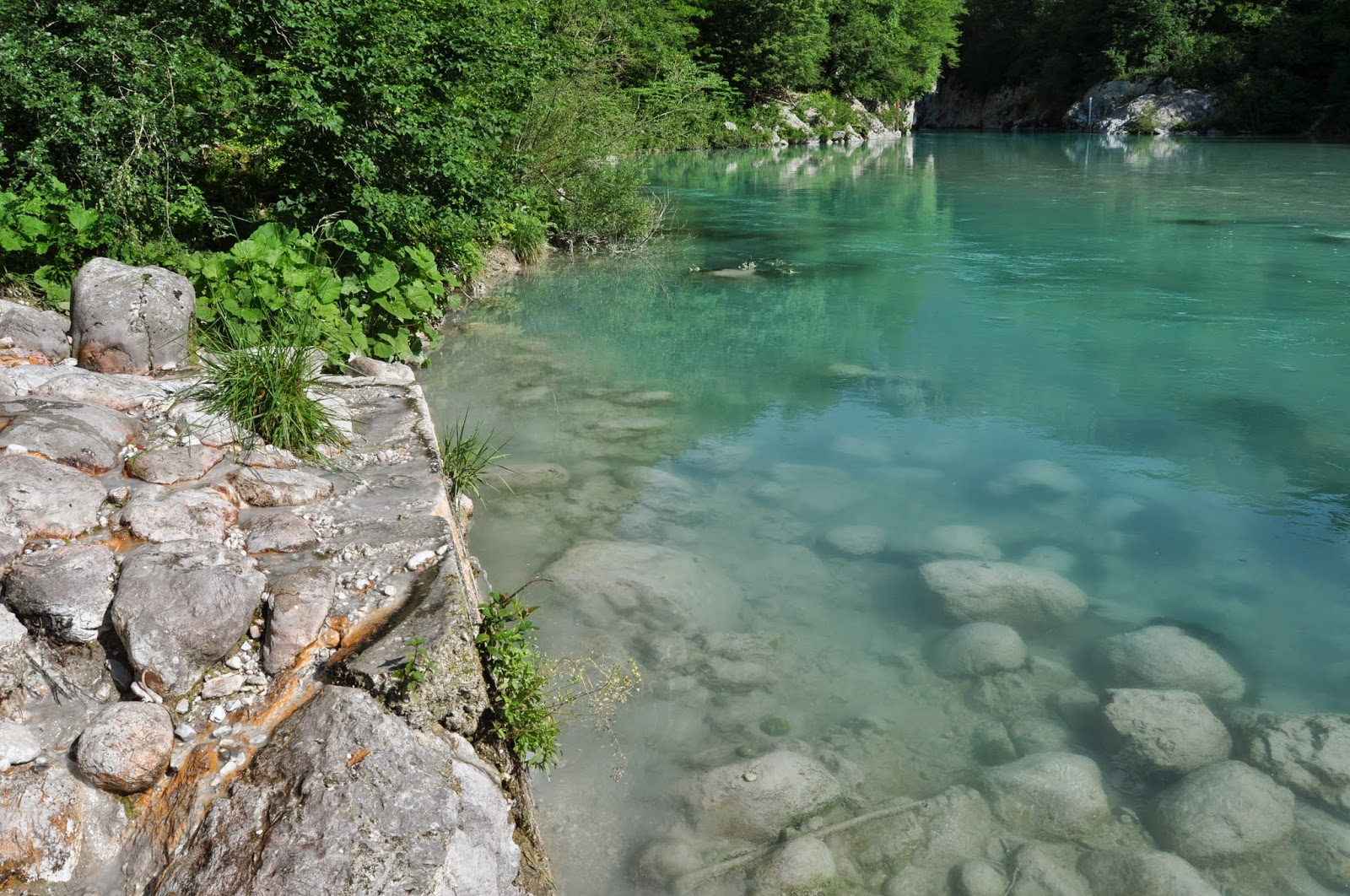 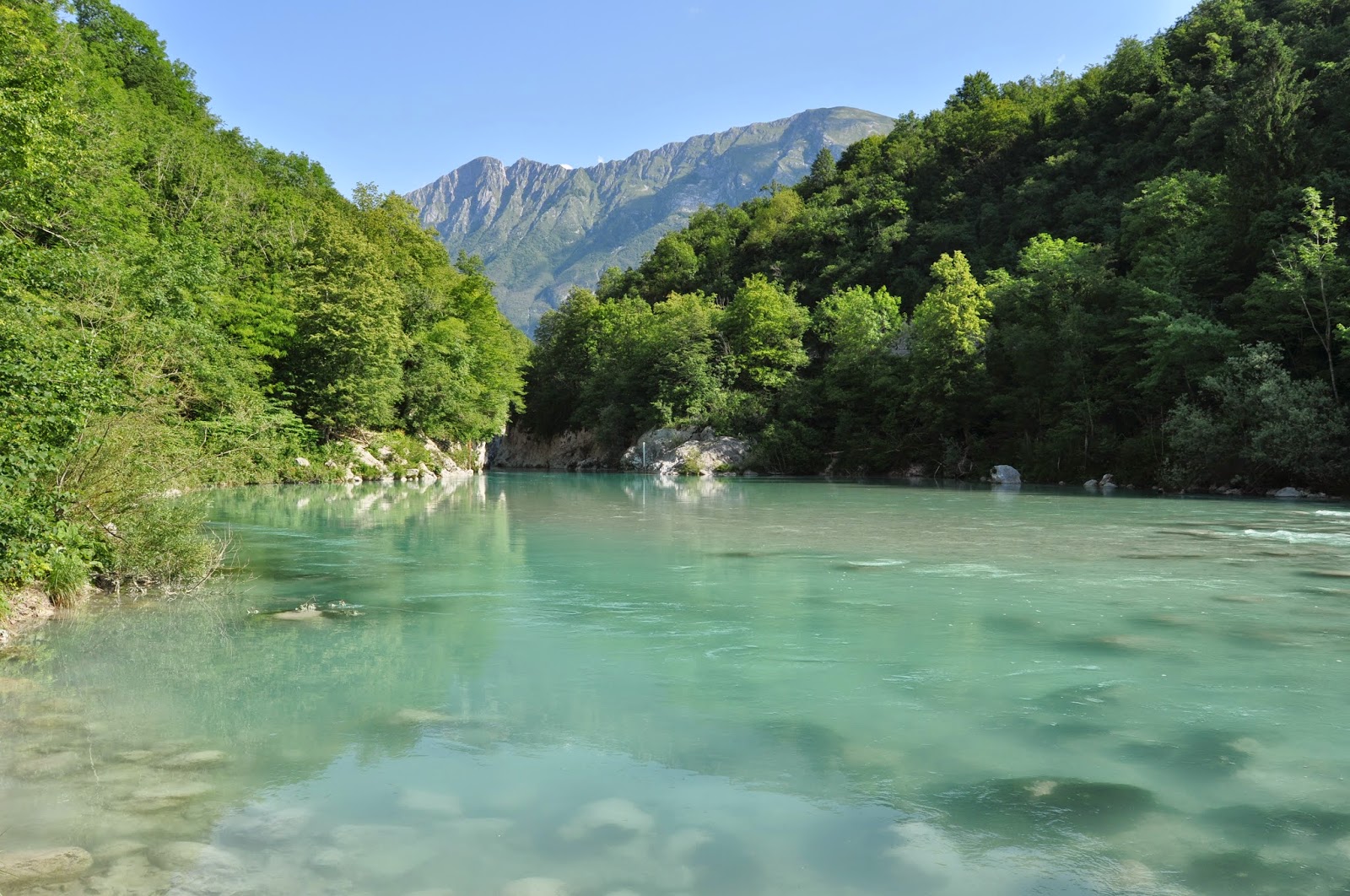 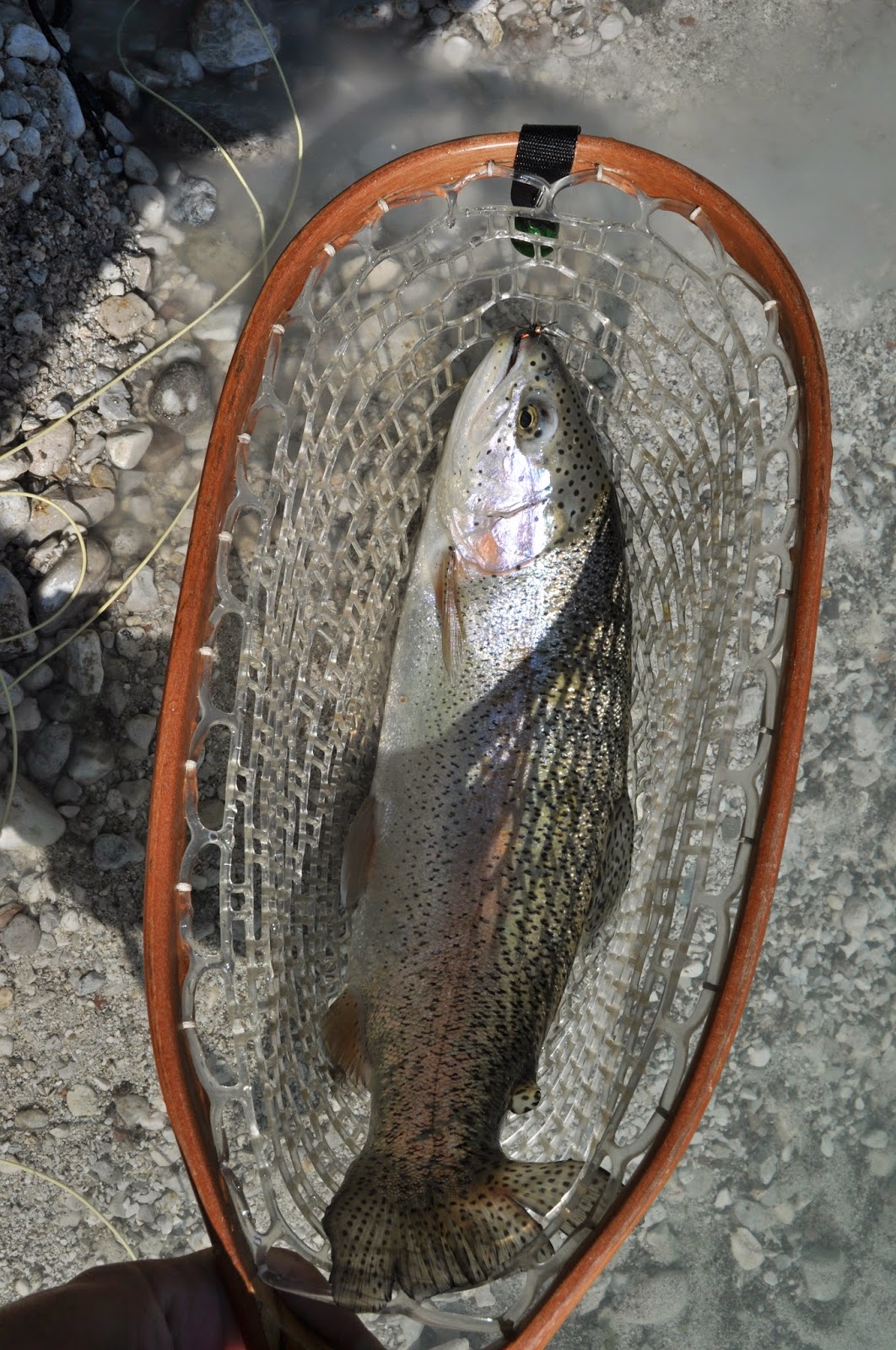 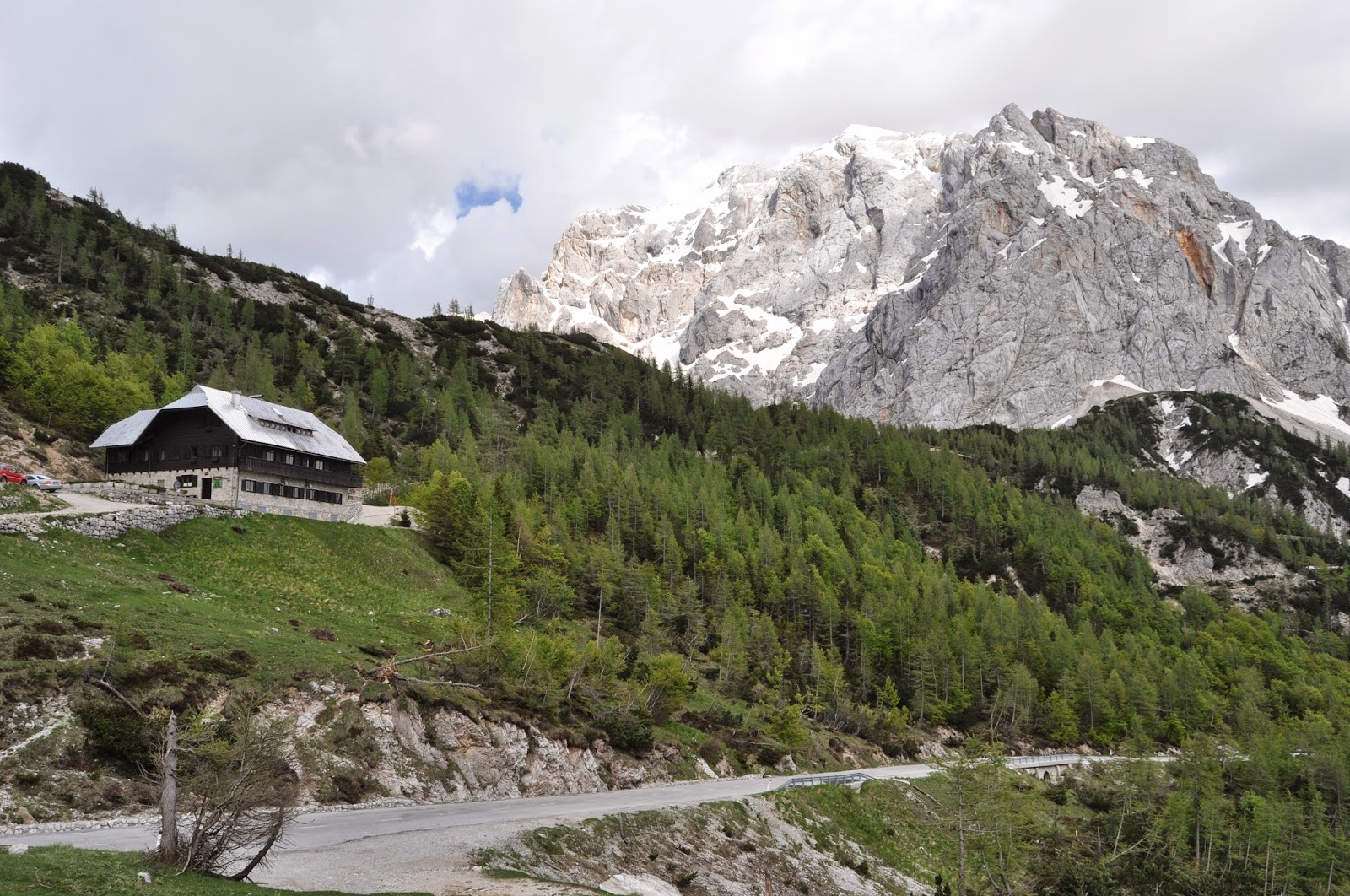 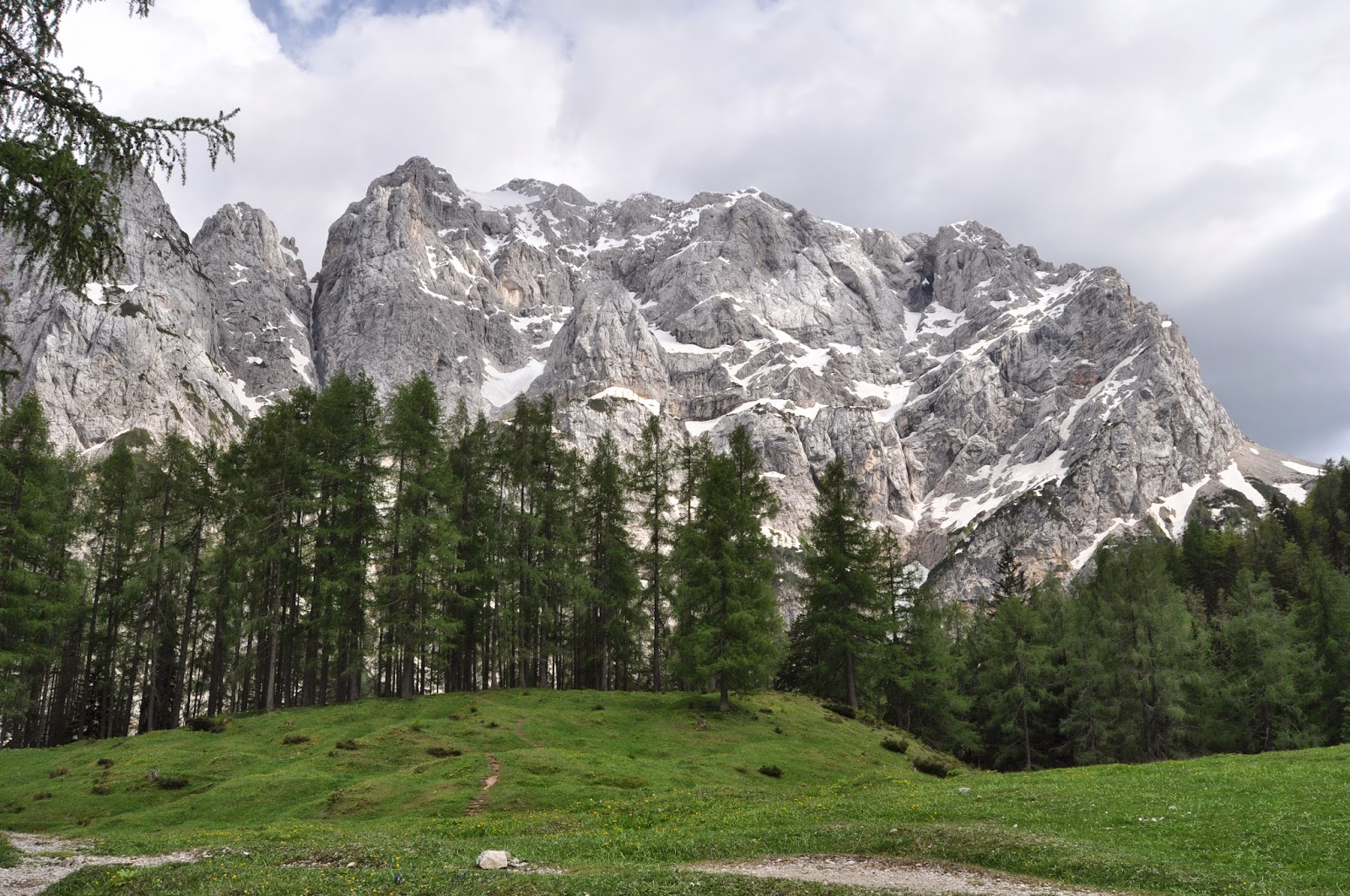 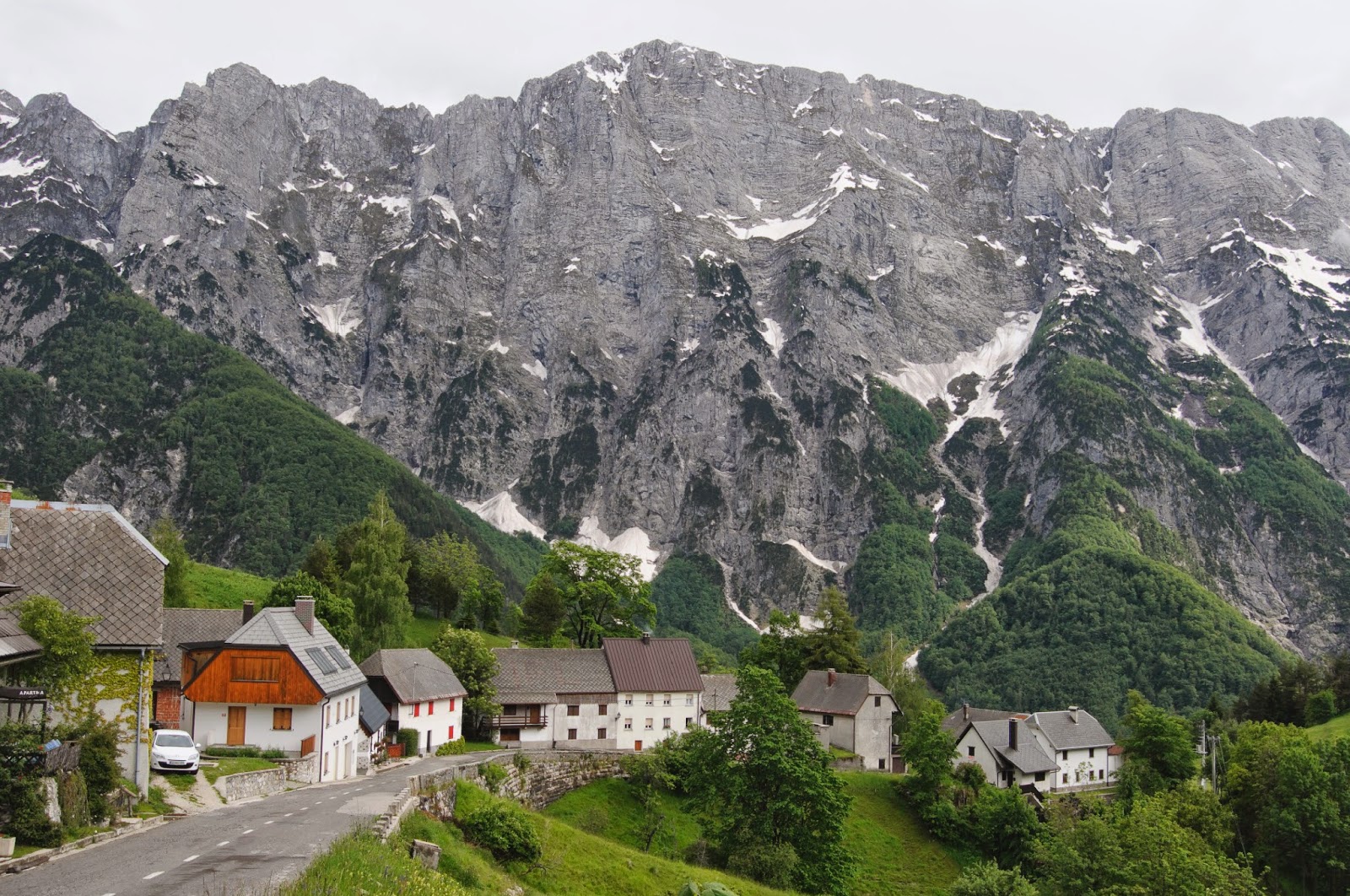 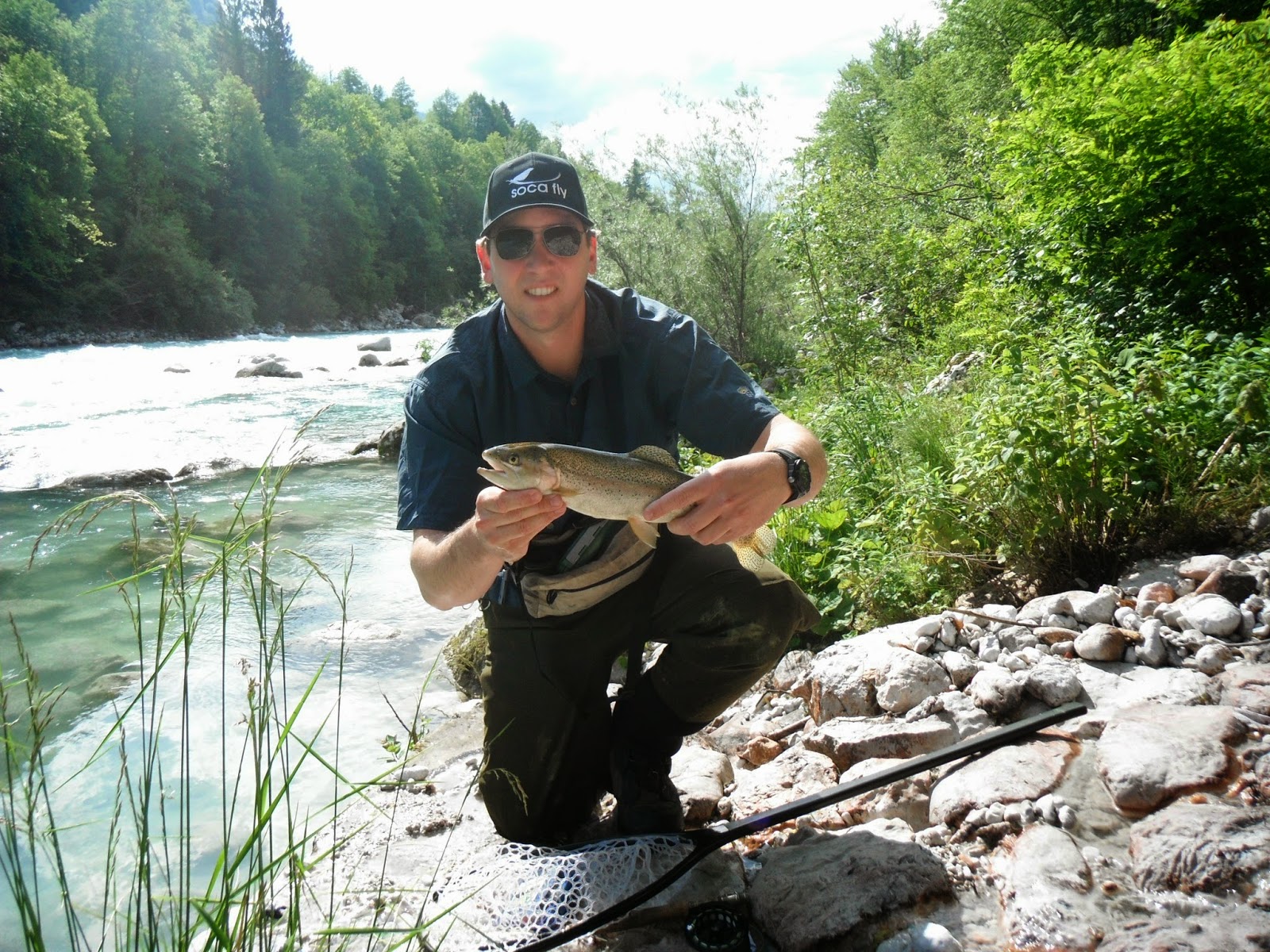 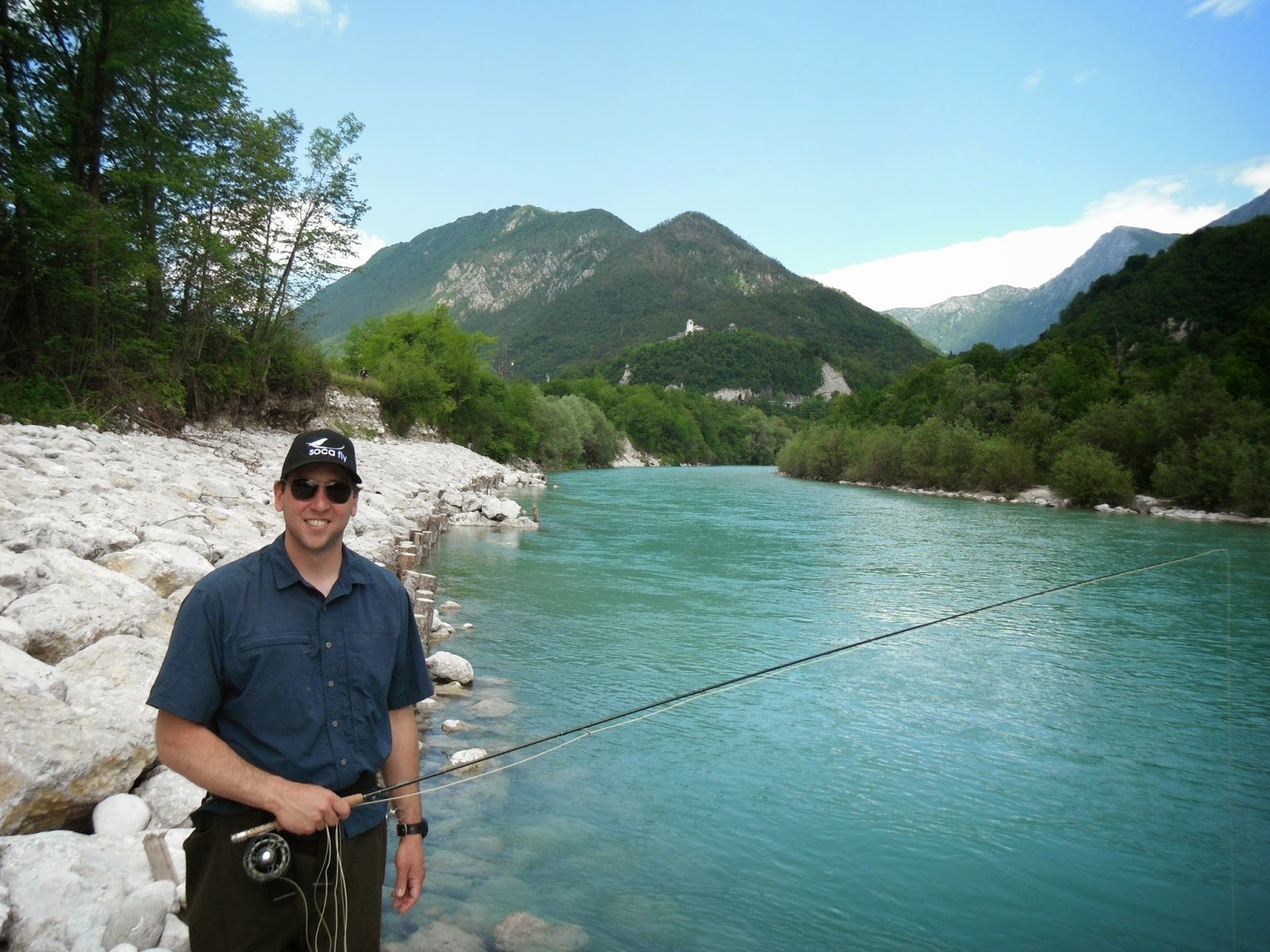 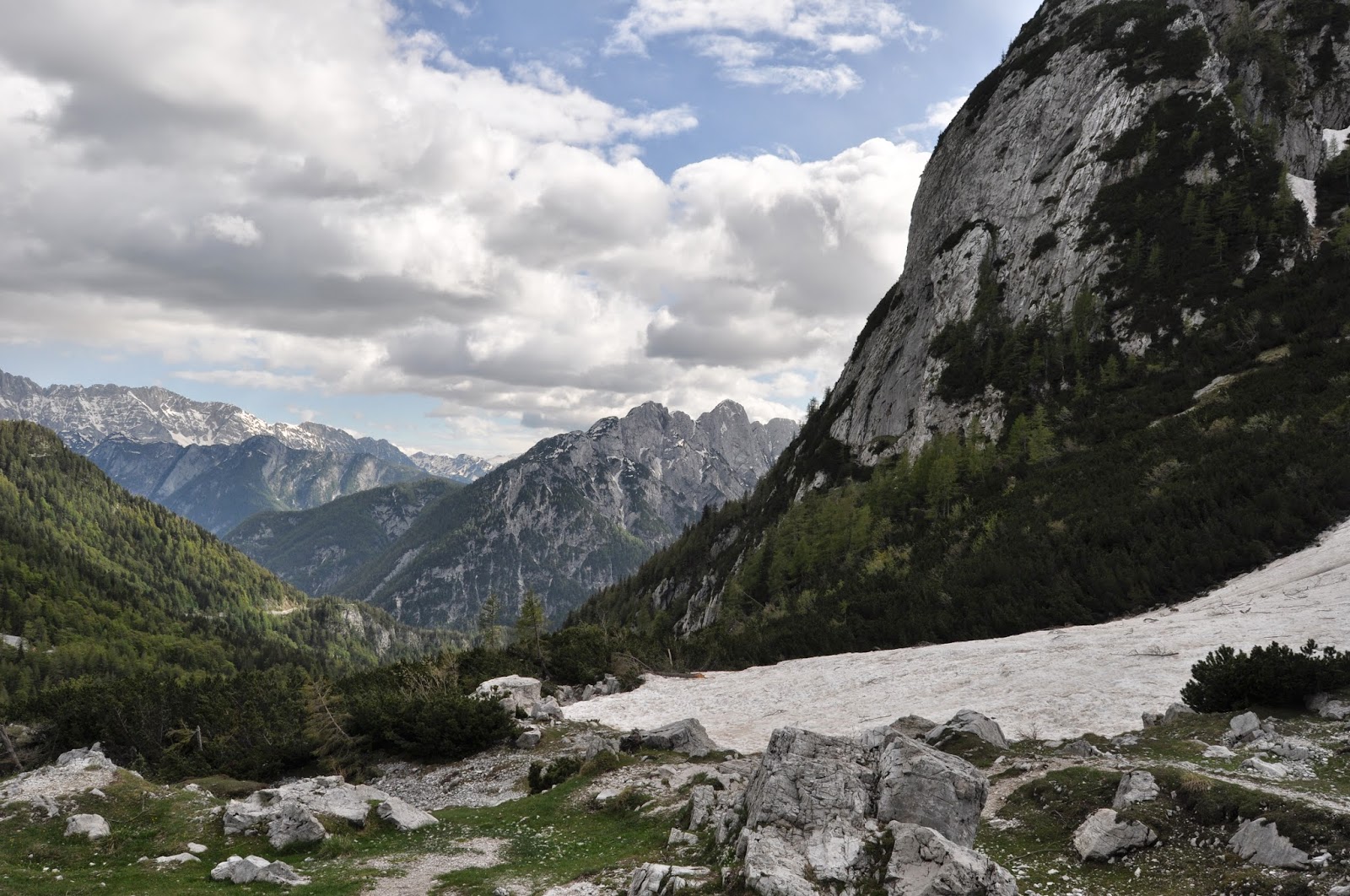 Fly rod of the moment 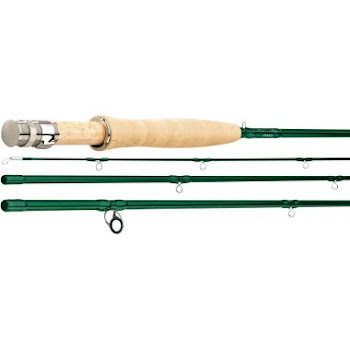 R.L. Winston GVX fly rods are made in Twin Bridges Montana. They are an all graphite version of the more pricy boron rods. Classic winston styling too.